Demystification of the story around Zrć: Novalja is the leader as a party destination in Europe

Yesterday and today an unofficial "festival of tourism" was celebrated in Novalja. First, on Friday, the conference "Youth: Drivers of Modern Tourism" was held, the goal of which was to demystify the story surrounding Zrć, and today a press conference was held where the tourism results of the first nine months in 2023 were presented.

It is interesting that there was a 14% increase in overnight stays by domestic guests, while foreign guests achieved 9% of overnight stays, which is partly the result of the successful positioning of Novalja as an outdoor destination. A higher category of accommodation brings better numbers.

Germany is traditionally the main emission market in Novalja, and this year there were as many as 34% more arrivals of Germans. This is followed by guests from Slovenia, Italy, Austria, the Czech Republic, Poland (39% more arrivals) and Great Britain. 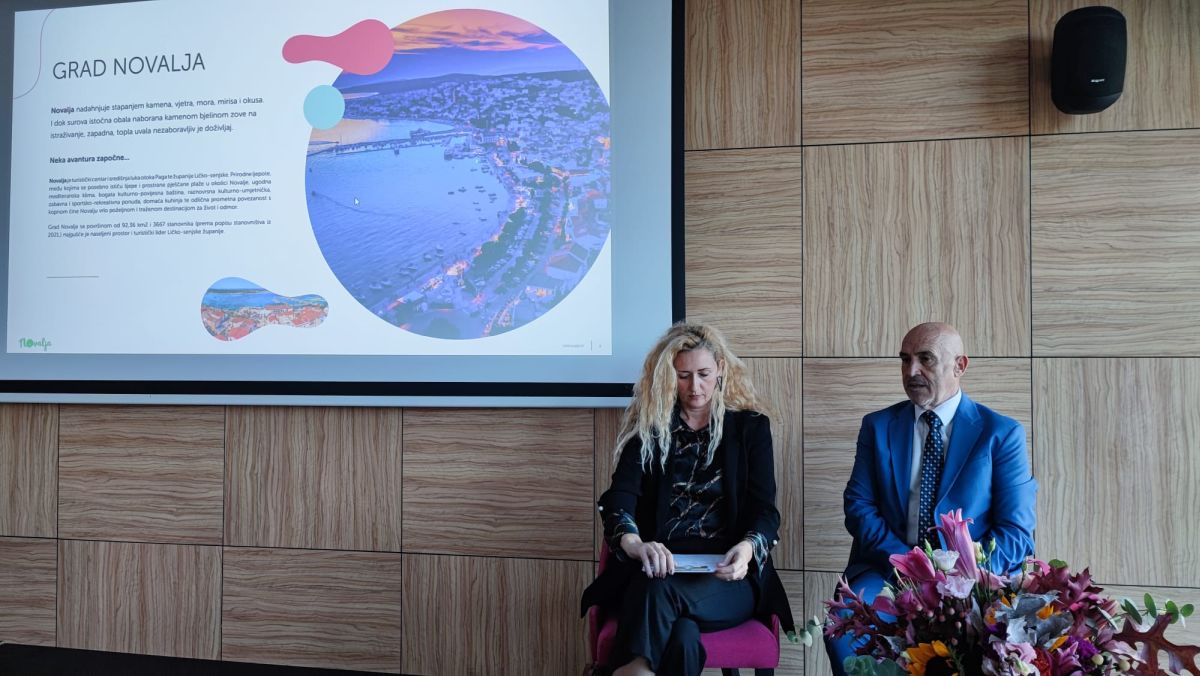 "I would like to thank all tourism stakeholders who participate in the tourist cake of Novalja as well as the local population for an exceptional tourist season. From catering staff, shop staff, communal system staff, civil protection staff and the coordination we held every week with city companies, the tourist community and the city's emergency services. I believe that it was precisely through this dedicated work that we largely contributed to these excellent results. All in all, we have a very good management of destinations from all levels in the area of ​​our city. Almost one million and 900 thousand overnight stays in the first nine months is a truly exceptional undertaking and an excellent result, which shows that tourism is very much alive and has recovered.", he pointed out Ivan Dabo, the mayor of the city of Novalja.

In 2023, Novalje will mark the 70th anniversary of organized tourism, and there is no better announcement than the current record-breaking tourist season, which is still ongoing in Novalja and will end with a New Year's concert.

A destination for party tourism, family tourism and active tourism. All this is Novalja, which at first glance combines the incompatible, and most importantly, in practice it works extremely well when everything is planned. This is also shown by the data, as in the age structure of tourists, young people from 16 to 30 years old or party tourism thanks to Zrće beach (16 - 30 years old) make up 46%, while the rest of the accommodation is made up of family tourism.

"The pandemic shocked all of us in tourism, but I believe that the results were capitalized due to the way we communicated and organized the season and the safety of the destination. If there had not been an adequate response from all the city's institutions and stakeholders, we certainly would not be able to talk about excellent tourism results today. Safety was the most important factor, while we made the most of our natural beauty this year. Guests from Germany are known to plan their holiday in advance and for whom safety is the first priority, and this year they achieved 34% more overnight stays, which clearly shows that our organization and safety were at a high level", He states Marina Šćiran Rizner, director of TZ Novalja.

Also, Šćiran Rizner emphasized that the Life On Mars track began to attract a large number of weekend visitors throughout the year, and the race itself this year attracted over 1.300 participants from 9 countries.

"The entire outdoor platform Pag Outdoor has achieved the national recognition of Novalja as an active tourism destination. This once again shows us the direction of what guests are looking for and how we must continue to strengthen that segment and invest in improving the infrastructure. Various sports events throughout the year in the pre- and post-season have become extremely attractive, from the Granfond, various sports tournaments to the International Dance Open, which this year attracted 4.000 participants. 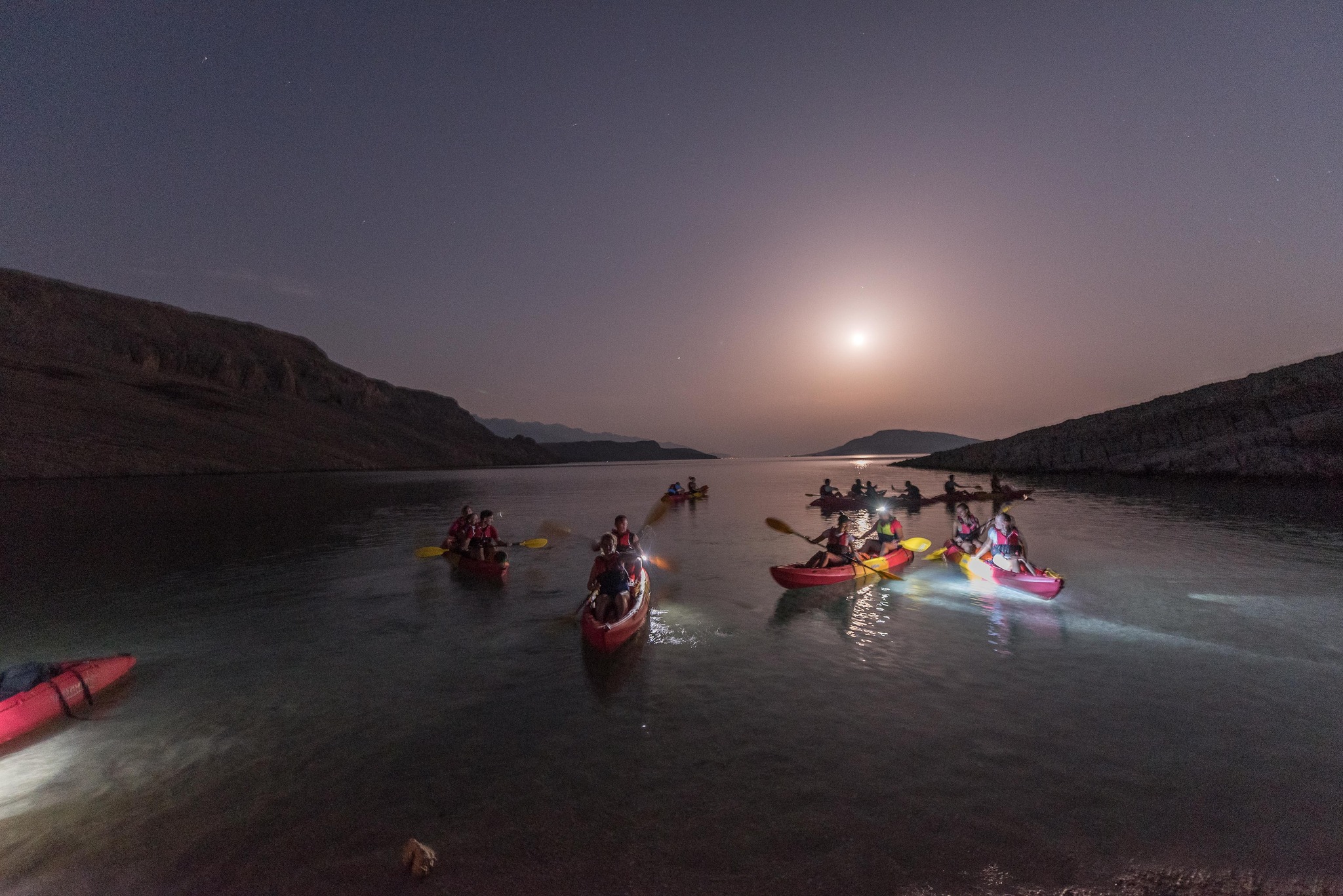 Festivals on Zrć are triggers and they are back in full glory. This year, there were 23 events at Zrće, which start as early as May and end in September. I am very glad that yesterday at the conference we sent a clear message, without any illusions and distorted images, that Zrće is a European brand and an excellent resource, and that Novalja holds the leading position as a party destination in Europe.

On the other hand, we have music concerts in the city for local guests, which are well attended. We also organize various gastronomic events, as a combination of tradition and innovative tasty combinations. Guests are increasingly asking for visits to cheese makers and local OPGs in the pre- and post-season, so we try to include each of our producers as much as possible in our tourism product. In the end, we can be satisfied because we extended the season, we started never earlier and in the first nine months we achieved a successful tourist season”, concludes Marina Šćiran Rizner, director of TZ Novalja.

Demystification of the story about Zrć

Conference Young drivers of modern tourism / Today in Novalja it was a real pleasure to listen to the thoughts of the leaders of the festival scene in Croatia.
Whatever you think about Zrće, it is undeniable that Zrće has made Croatia and Novalja a famous European, even worldwide, tourist destination and one of the most famous party destinations in Europe.
Also, precisely because of Zrć, a lot of related industries and local companies have started up, and because of Zrć, huge tourist consumption is generated, the price of real estate has increased and the season has been extended, and the city has created capital for its development. Novalja is the only real party destination in Croatia, and this year over 23 big events were held in the clubs by the beach with guests from all over the world.
According to data before the pandemic, about 35% of guests came to Novalja for Zrće, while the majority of guests were based on family tourism. A combination of the incompatible that really works in Novalja.
Two years ago, Pag developed a new tourist product through active tourism - Pag Outdoor. Each as an independent product, but they complement each other perfectly. Like everything, party tourism has its negative sides. But with the synergy of everyone in the destination, from beach concessionaires, clubs, the city, TZ, local residents, everything can and must be put into realistic and sustainable frameworks.
The key word is synergy, planning or strategic development. And there is plenty of that in Novalja. Because without it, Zrće would never have become what it is. Be sure of that. It is a top organization at the world level.
The conference brought together some of the people behind Zrć. Ivan Bušljeta (Papaya, Aquarius and NOMAD), Boris Šuljić (Calypso and Tattva), Steven allison (Hideout Festival) Martin Reitstatter (Austria Goes Zrce and Bavaria Goes Zrce) i Dalibor Oliver Zjacic (Sonus Festival). 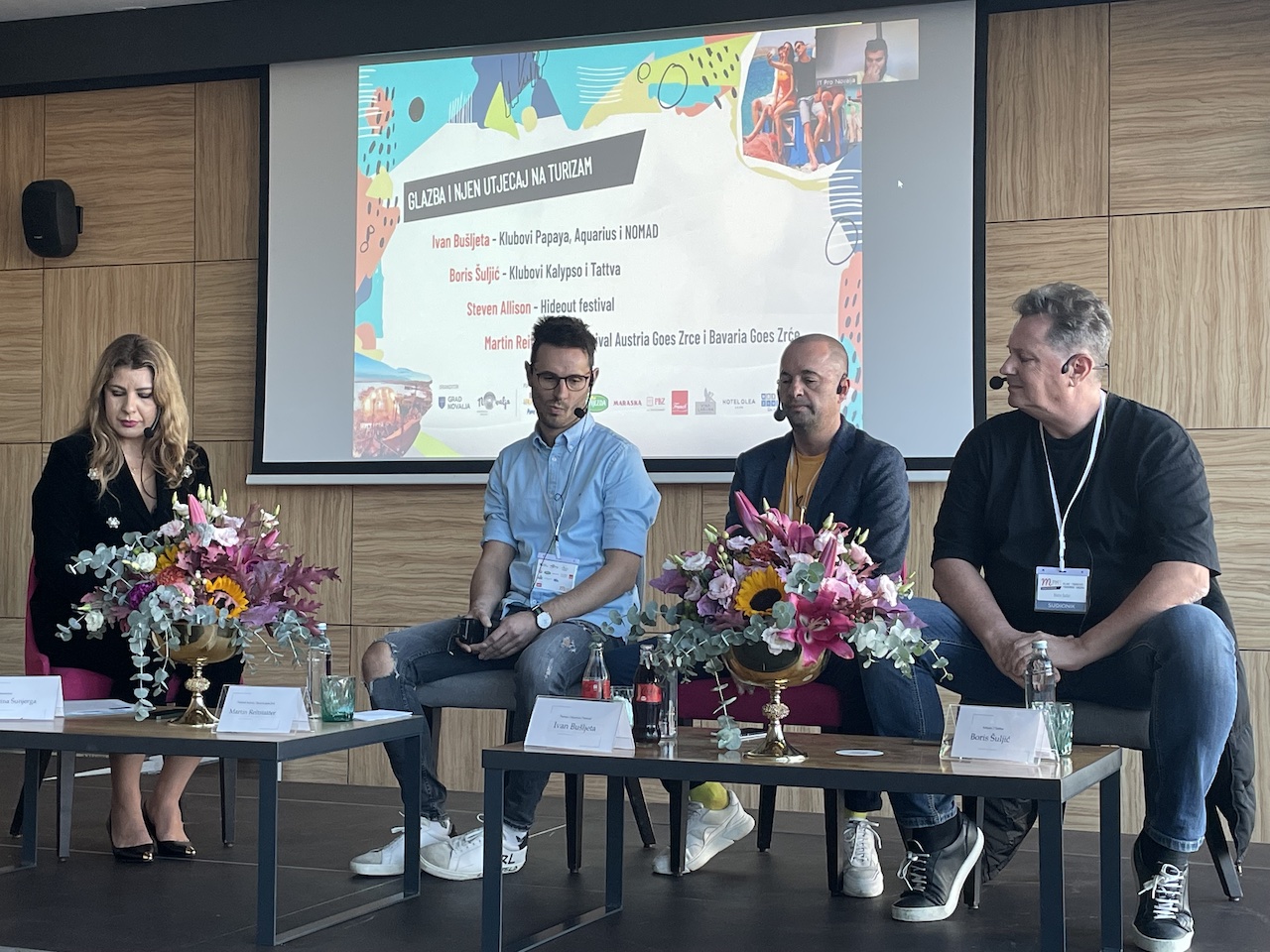 It was a real pleasure to listen to these giants in the organization of big festivals, how the story started in Zrć, what were all the challenges and what were their thoughts about the future. It is difficult to convey in a few sentences all the topics that were talked about, but one of the topics was the metaverse.
Fortunately for me, most agree that they will never replace going to a real festival and a real experience. It is certain that the metaverse will grow in the future, but as far as tourism is concerned, it will never be threatened. Metaverse is just one of the new tools/media for promotion and communication, it will certainly not replace tourism and the experience of a real festival.
Although Zrće is too often presented in a negative context, do not forget that it is a stage for the world's best musicians. Being in the spotlight of global production is not and cannot be accidental. Gaining the trust of big foreign musicians, festival organizers... who put their reputation on the line, without a serious organization (which is not visible to people outside the industry) is not an easy challenge at all. And they succeeded in Novalja.
Steven Allison, when asked why he chose Novalja as a destination for the Hideout festival, emphasized that the primary reason was the excellent organization at all levels in Novalja. From the clubs in Zrć, the city and city services, to the agencies and the entire technical support and production, it was crucial and an absolute imperative. Because organizing a festival at that level in a foreign country without excellent infrastructure and organization on the ground is an adventure that no serious festival organizer would embark on. Regardless of a phenomenal location such as Zrće beach, because the location is only one small part of the organization. Organization, technical and production conditions are key.
As I said, success also brings various challenges, but that is part of business processes and development that we have to deal with. Zrče, with all its faults and advantages, is a European brand. And period. And that's no accident.
This conference in a way demystified Zrće and presented it as a very serious branch of tourism. Party tourism, as well as all processes in tourism in general, must be taken seriously and planned strategically.
Bravo for the initiative and the opening of this important topic.

And finally, in the context of the negative impact of party tourism and mass tourism in general, the most important is education and communication. All guests come through agencies, a couple of transport routes and all sleep in some accommodation. We must educate and communicate the rules of behavior in our destination, and only at the end if necessary introduce repression through punishments.

These are all challenges brought by tourism, but if we do not deal with them strategically, they will escalate. 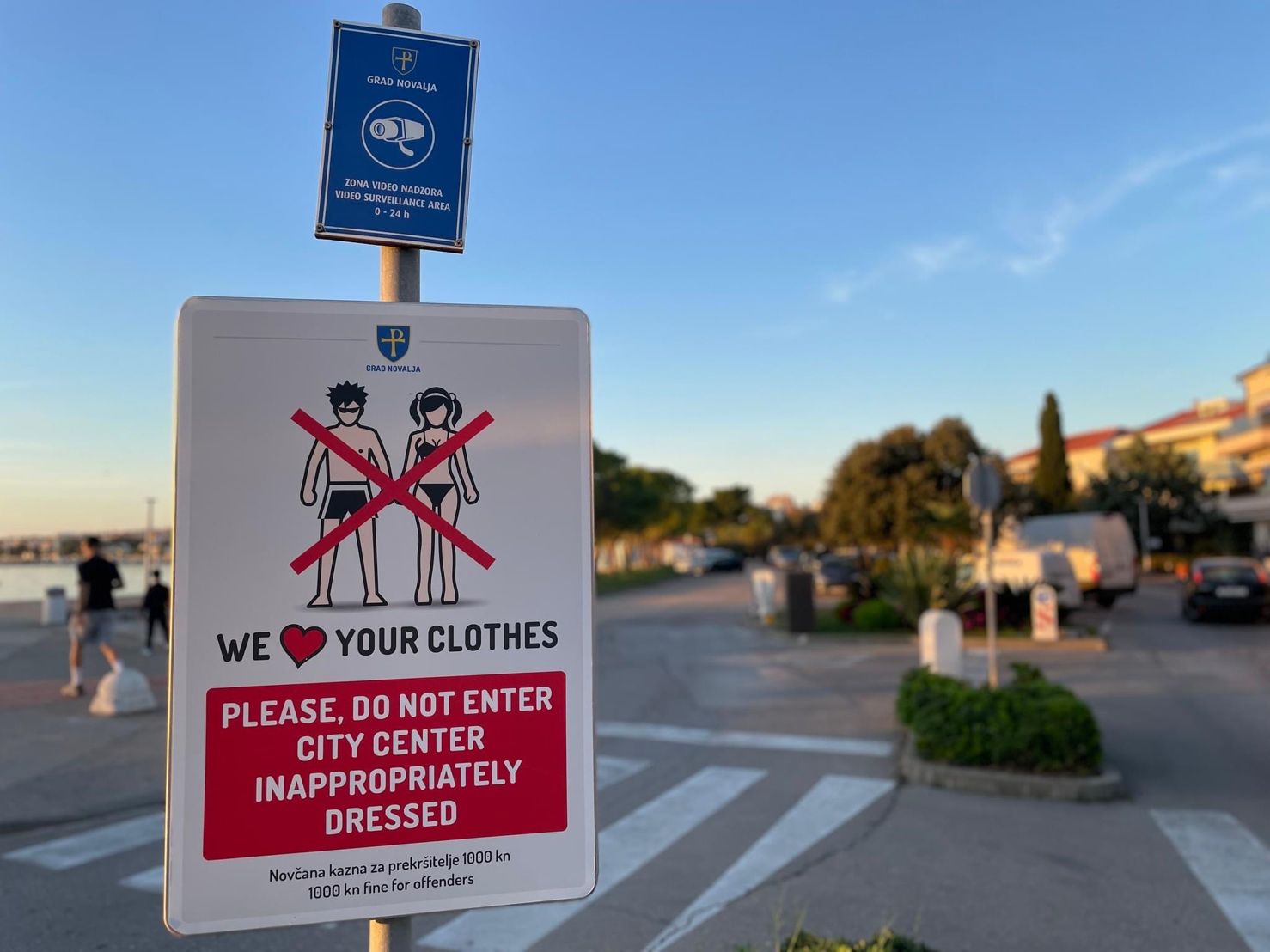 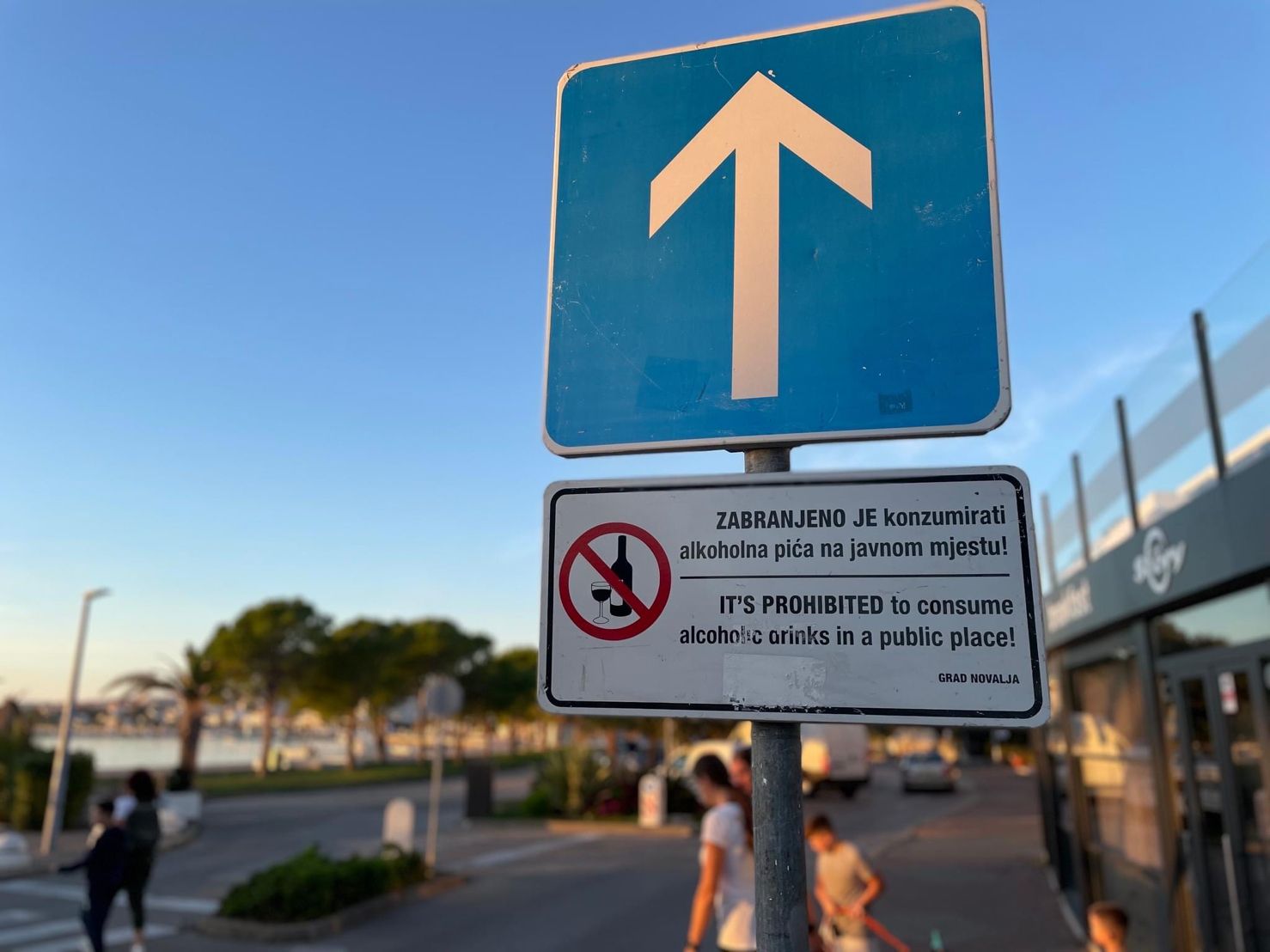 Novalja is more than Zrć! It hides top gastronomy, wonderful heritage and the island way of life Marina Šćiran Rizner, TZ Novalja: We have a recognizable tourist product that responds to the problem of seasonality GRANFONDO attracted cyclists from 9 European countries to the Moon Island