Gault & Millau: Awards given to the best chefs of Zagreb County

The promotion of the first gastro guide "Gault & Millau Zagreb and surroundings 2022" organized by the Zagreb Tourist Board took place today at the Korak Winery.

The promotion of the first gastro guide was held today at the Korak Winery "Gault & Millau Zagreb and surroundings 2022 “ organized by the Zagreb County Tourist Board.

After a five-year presence in Croatia, Gault & Millau has published its first specialized edition for Zagreb and its surroundings, which is also an announcement Gault & Millau Croatia 2022 which comes out in early April. City of Zagreb and Zagreb County that's how they got their edition of this prestigious gastronomic guide. For the first time in history, a bilingual (Croatian-English) edition of the guide was published, translated by Morana Zibar. The guide contains reviews and photos of 100 restaurants, taverns, snack bars, POP bars and patisseries in Zagreb and the surrounding area.

Zagreb County has a rich tradition in gastronomy because it has a large number of products with a mark of origin.

Although the destiny of every good dish is to disappear soon after it is prepared, our dishes have the status of a cultural asset precisely because of carefully preserved recipes and skills passed down from generation to generation, as part of the unique local heritage, said the director of the Zagreb County Tourist Board. Ivana Alilović and added that they are grateful to their caterers who, thanks to their dedicated work, are included in the Gault & Millau guide Zagreb and surroundings 2022.

"Chef's hats printed on a yellow sticker are a guarantee of proven quality for tourists. Zagreb County is also home to black truffle, a food of the Gods that excellent chefs use and compose with our indigenous cuisine. Food and culture are deeply ingrained in Zagreb County's national identity. Even the simplest dishes cooked by our grandmothers are real gastronomic specialties because they are prepared from authentic ingredients from family farms. This unique story "from the field to the table" is very important., added Alilović.

She added that they are extremely proud that in cooperation with the Tourist Board of the City of Zagreb they participated in the preparation of the world gastronomic guide Gault & Millau Croatia in order to presented a fragment of their authentic gastronomic scene. "I thank Gaul & Millau for believing in the strength and quality of our County's gastronomy. "Concluded Alilović. 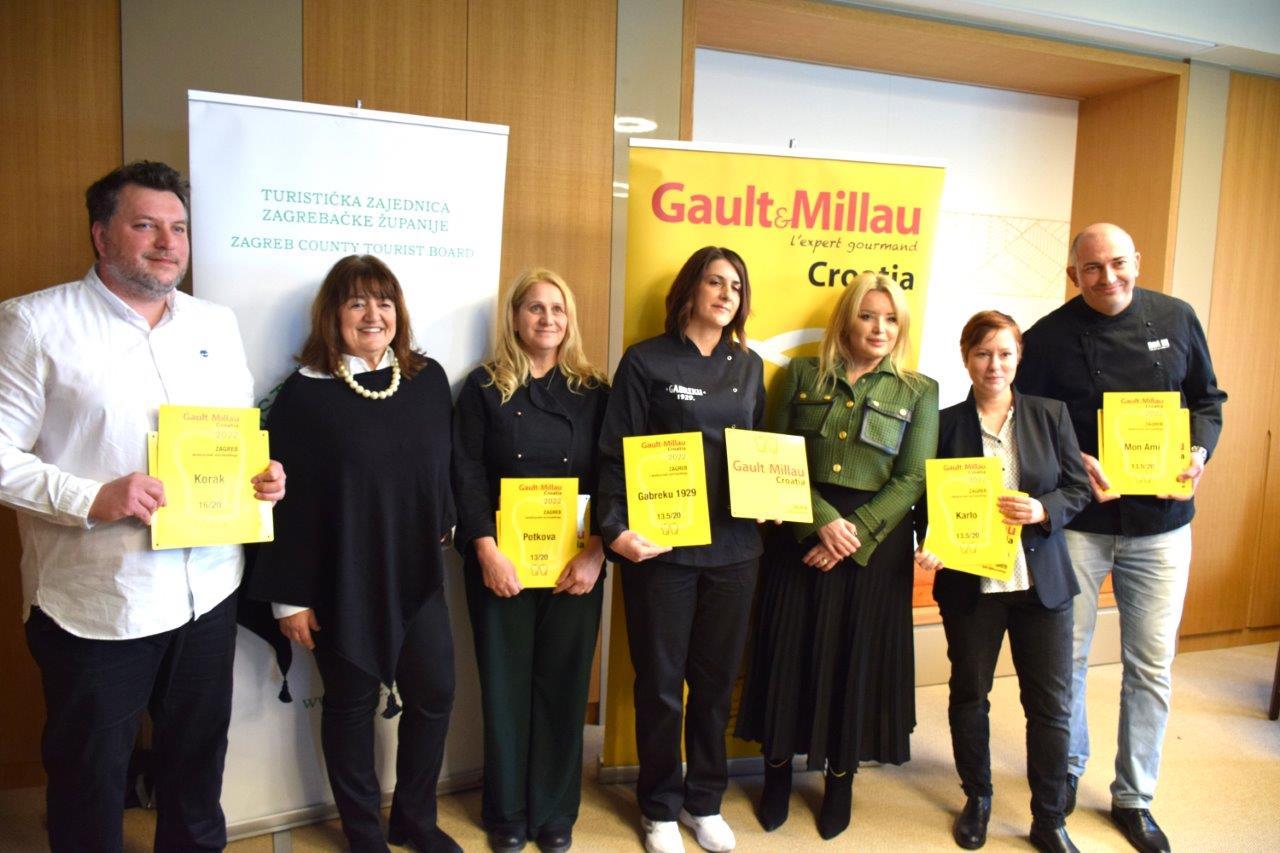 Zagreb County and the City of Zagreb are top gastro destinations with great wealth. The quality of the food is exceptional, so the idea of ​​expanding the next guide to include family farms and wineries in addition to restaurants will be considered.

"The gastronomic scene of Zagreb and its surroundings has developed especially in recent years, and the city has received many new restaurants with a rich and varied offer. Sure, some of them deserve a place in the guide, but due to the limited number, they could not be included in this year's selection of the print edition. However, they will be presented on the GM website, where the content of the guide for the whole of Croatia is available, and it records 2,5 million users and 6 million views a year. The printed edition of Gault & Millau Croatia 2022 for Croatia will be published on April 5. Therefore, a special edition for Zagreb and its surroundings is a true announcement of what awaits us then. ", she pointed out Ingrid Badurina Danielsson, director of Gault & Millau for Croatia.

As part of the promotion they were awarded awards to the best chefs of Zagreb County.

"Our restaurant nurtures tradition and cuisine not only as an offer but also as a culture of living and creating unique stories. The combination of our rich heritage and knowledge results in authentic gastronomic experiences recognized by Gault & Millau. This recognition is a great incentive to our work and effort. We have made a big step forward since last year and I hope we will continue to do so" He said chef Bernard Korak.

Gault & Millau is a French restaurant guide founded by two critics, Henri Gault and Christian Millau, in 1965.  Restaurants are aboutrates on a scale of 1 to 20, with 20 being the highest. Points are awarded based on the quality of the food, along with comments on the service, price or atmosphere of the restaurant. Based on this rating, high-ranking restaurants can display one to four toques. Naftalan, after investing in a swimming pool complex and new facilities, is a leader in health tourism in Zagreb County
OPEN Ivana Alilović: By analyzing trends, tourism indicators confirm that we are going in the right direction
OPEN Dubrovnik: no superyachts, but cruisers are returning More than 300 inspections in the Dubrovnik-Neretva County Launched in Rijeka Scenic Eclipse II: The most luxurious expedition cruiser in the world will set sail in 2023. Island kulenijada: Kulen must have a price of 50 euros